Its downtown district is immediately east of the confluence of Cherry Creek and the South Platte River, approximately 12 mi (19 km) east of the foothills of the Rocky Mountains. It is named after James W. Denver, a governor of the Kansas Territory. It is nicknamed the Mile High City because its official elevation is exactly one mile (5280 feet or 1609.344 meters) above sea level. The 105th meridian west of Greenwich, the longitudinal reference for the Mountain Time Zone, passes directly through Denver Union Station.

Denver is a rapidly growing and diverse area.The most common ancestry groups in Denver are Mexican (31.2%), German (14.6%), Irish (9.7%), English (8.9%) and Italian (4.0%). 23.5% of Denver’s population speaks Spanish at home.According to the Colorado State Demography office, 34 percent of Denver’s population is Hispanic.

COLORADO CONTINUES ITS RUN AS ONE OF THE HEALTHIEST STATES IN THE U.S. At the systems level, HCA Continental Division/Healthcare One in Denver and UCHealth in Aurora were named among the top five health systems in the nation, according to IBM Watson Health. 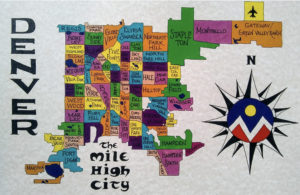 Get to Know the Denver Metro Chapter Leadership Board

The NALHE Denver Metro Strategic Plan for 2023-2025 is currently in development!

Vision
To provide a framework to bring together Latino/Latina and multicultural healthcare leaders and professionals, early careerists, students, local industry experts, community stakeholders, partners, sponsors, and affiliates as a group to meet, discuss, and influence factors which affect the representation of Latino/Latina and multicultural individuals in healthcare leadership roles locally and regionally; to foster greater participation in the advancement of diversity and inclusion and health equity initiatives at a local level.

Purpose
• Promote health equity for Latino/Latina communities by increasing Latino representation within healthcare systems, and by supporting policy, legislation, and regulation that improve health and health care for diverse communities.
• Goals: Membership – increase membership from 0 to 100; Fundraising – $1,500 for 2019-2022 and increase accordingly each year. Events – 2 to 3 per year.
• Metrics: – New Members/quarter; Member Retention; Sponsorship/quarter; Monitoring passing of Legislative bills/first 2 quarters of the year.